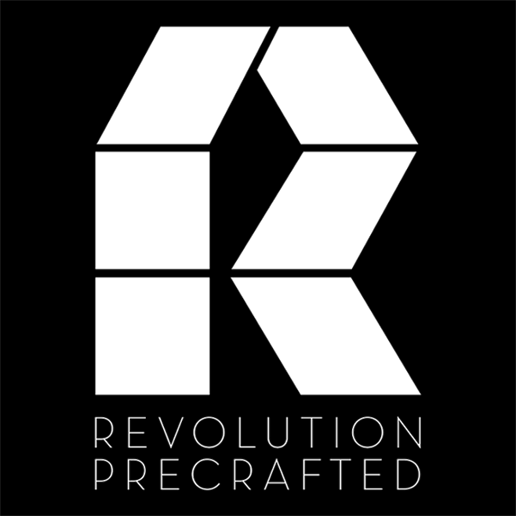 Revolution Precrafted, the country’s first unicorn and the trailblazer for local start-ups, combines world-renowned designers and the latest advances in construction technology to deliver designer, custom homes at five times the speed and nearly half the cost to property developers and landowners. This winning business model may just expand further through Revo’s recent partnership with the Department of Science and Technology (DOST) which brings with it a network of researchers in materials science and construction engineering. With an army of researchers on Revo’s side, novel construction methods and materials will find their way in Revo’s homes.

Revo states that, “Now is the time to showcase Philippine ingenuity through research and development on construction materials on the world stage”. DOST-PCIEERD on the other hand says, “We’d like to build on the early success of Revo and improve further this global product through innovative materials developed through the interaction of Revo and DOST scientists and engineers.”

Founder and CEO of Revolution Precrafted, Robbie Antonio is regarded by many as the face of the start-up scene in the Philippines and disruptor of traditional brick and mortar businesses. This dynamic and pioneering relationship with DOST enables policies, programs and strategies to be developed. Their shared mission is to implement the optimal utilization, transfer and commercialization of technologies and research outputs. DOST-PCIEERD Executive Director Carlos Primo C. David emphasized that the partnership provides a venue for the exchange of ideas on products for development and leads the way to innovation, research and development in the industry.

Exclusivity, efficiency and versatility are realized by taking advantage of advanced and new materials, products and processes suited for prefabricated exteriors and interior panels, prototypes, and to create systems for faster assembly. The marriage of art and technology is made possible by connecting preeminent architects, artist and designers with a network of scientists, researchers, tech firms and start-ups in the Philippines.

With the sharing of the innovation, the DOST is providing its entire research force in creating innovative materials for use in these bespoke structures. The Revolution Precrafted collaboration is the first step to pioneer design democratization. Now, the creation, research and development of technologies for prefabricated materials allow accessibility to the world’s best architects at an affordable price.

Revolution Precrafted aims to be the structure supplier of choice in the world with a vision of filling the need and fulfilling everyone’s dream of having a home. “Quality, value and beauty of design should be available for all. We can accomplish this as we leverage on cutting edge research and technology”, as stated by the company.

Overall, the partnership contributes to DOST’s long term vision as a provider of world-class scientific, technological and innovative solutions for the economic and industrial development of the Philippines. 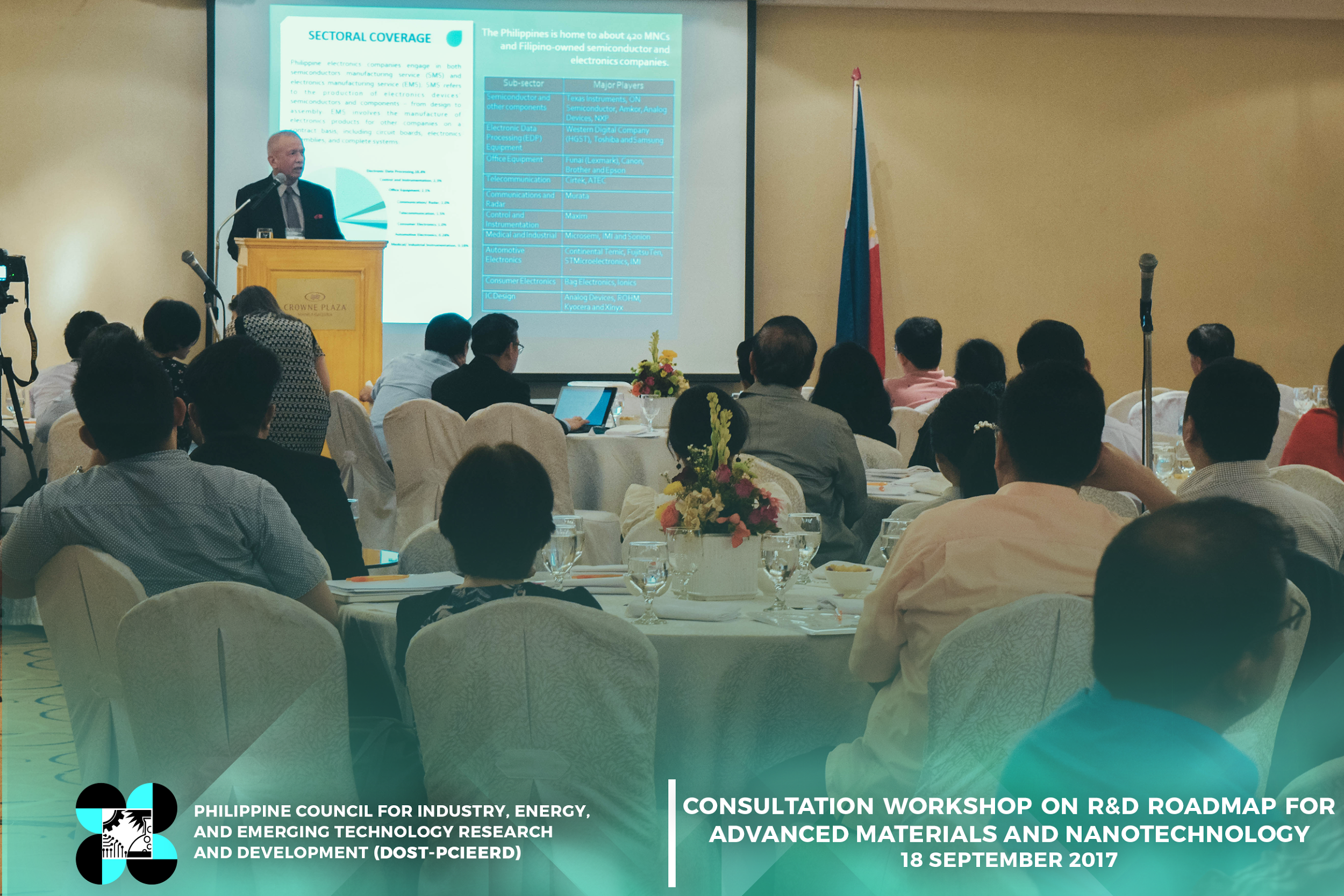 Where are we heading in the Advanced Materials and Nanotechnology sectors?

Key industry players and representatives from the academe and government agencies collectively identified important areas for research and other collaborative activities for a five-year roadmap for the Advanced Materials and Nanotechnology sectors during a consultation workshop on September 18, 2017 at the Crowne Plaza Hotel.

The Innovation Council, DOST-PCIEERD, together with its stakeholders, crafts research and development (R&D) roadmaps for each of its sectors to prioritize projects and focus R&D to those that will provide maximum output that are relevant and beneficial to industries and all Filipinos.

“We are just an instrument for the industry so that they become stronger, more competitive, more efficient, and so on. ‘Yun ang ultimate objective natin. (That’s our ultimate objective.) We are making it different this time because we want the industry themselves to say, 'ito ang kailangan ng R&D natin’,” said PCIEERD’s Executive Director CP David during the workshop.

Director Evariste Cagatan of the Board of Investments (BOI) discussed the overall situation of the Advanced Materials and Nanotechnology sectors in the country. “We would need a lot of help for advancing our technologies so that we will not be contented with doing low-value activities. We need to strengthen our industry-academe linkages, we need to proliferate R&D facilities, and we have to strengthen the linkages between manufacturing, agriculture and services,” she acknowledged.

Representatives from private industries presented their respective companies’ roadmap, needs, and objectives to give the participants insight onto what they can contribute to these industries. They were then divided into three simultaneous breakout sessions to deliberate on priority areas for: 1) Electronics and Semiconductor; 2) Renewable Energy and Energy Storage; and 3) Paints, Plastics, and Chemicals.

The following were identified as areas for possible R&D collaboration among DOST, academe, and the industries:

Session A: Electronics and Semiconductors Session

These focus areas give a general direction to the Advanced Materials and Nanotechnology sectors. It will be further refined through continuous communication and, if necessary, consequent workshops among the government agencies, academe, and the industries. It was strongly suggested that the participants gather annually to discuss the progress in their respective fields.

Engr. Raul Sabularse, PCIEERD Deputy Executive Director, reminded the participants in his closing remarks that the roadmap is a “commitment of all stakeholders, so that in the end we will say, "Yes! We did the right thing by putting the money on this particular project where it is very much needed by the industry." 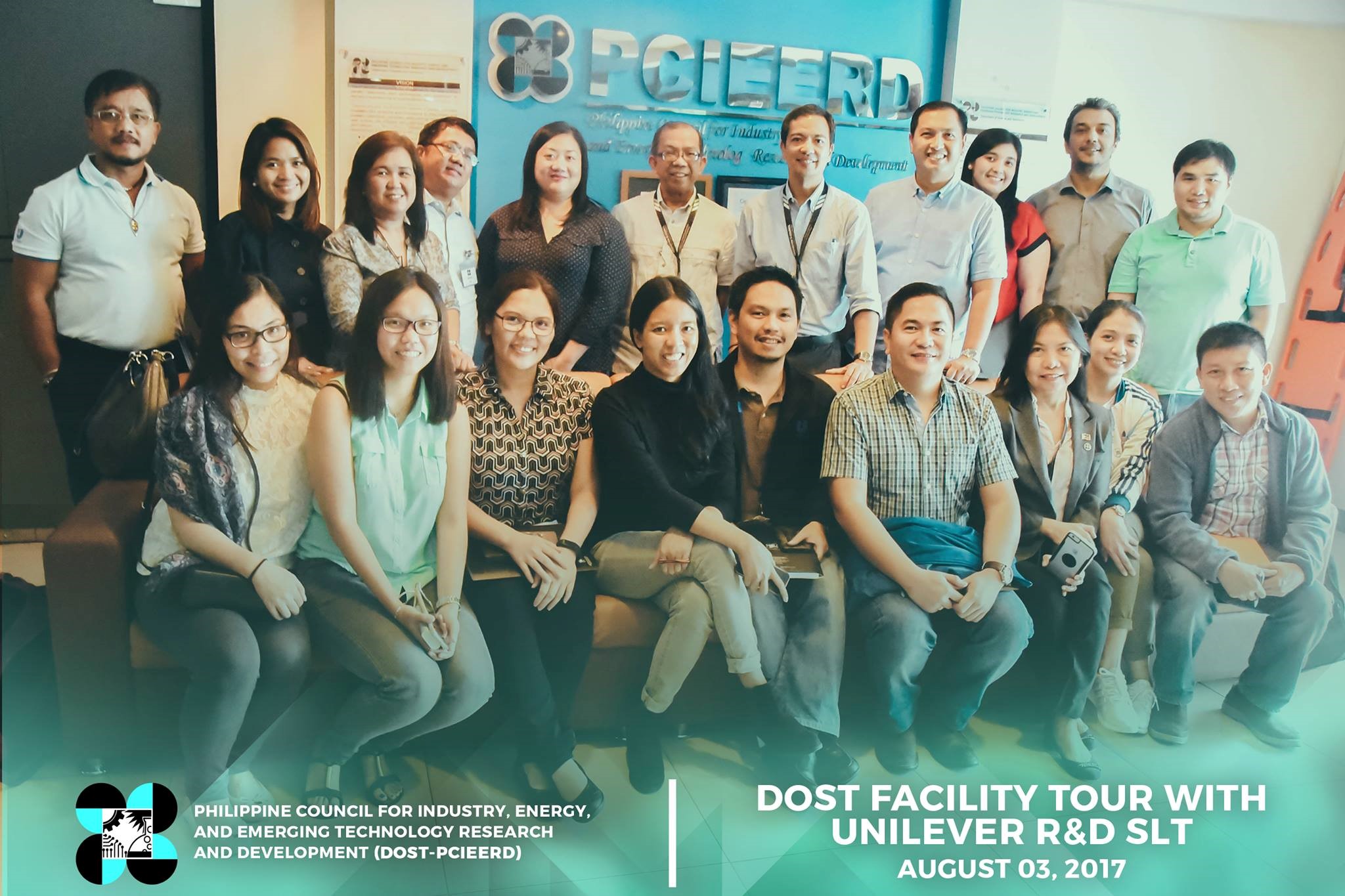 A team of research and development specialists from Unilever Philippines visited the Philippine Council for Industry, Energy, and Emerging Technology Research and Development (PCIEERD) explore areas for possible research collaboration particularly for the production of new products or improvement of existing with S&T innovations.

The team was led to facilities that they can access for their R&D activities, namely:

PCIEERD Executive Director Carlos Primo David facilitated the discussion on possible partnership, stating that the Council is now geared to having more interaction with the industry to make sure that government resources will be put in good use.

In general, collaboration with DOST could start in addressing Unilever’s current challenges in the food and personal care sections, that is in nutrition content and use of local flavors and ingredients.

DOST-PCIEERD and Unilever Philippines are yet to set another meeting to further discuss the possible collaboration.

Also on August 1, a facility tour was conducted for exchange students from Tokyo Tech High School of Science and Technology and De La Salle University-Integrated School to explore the current trends in research areas related to energy production and its impacts to the environment. 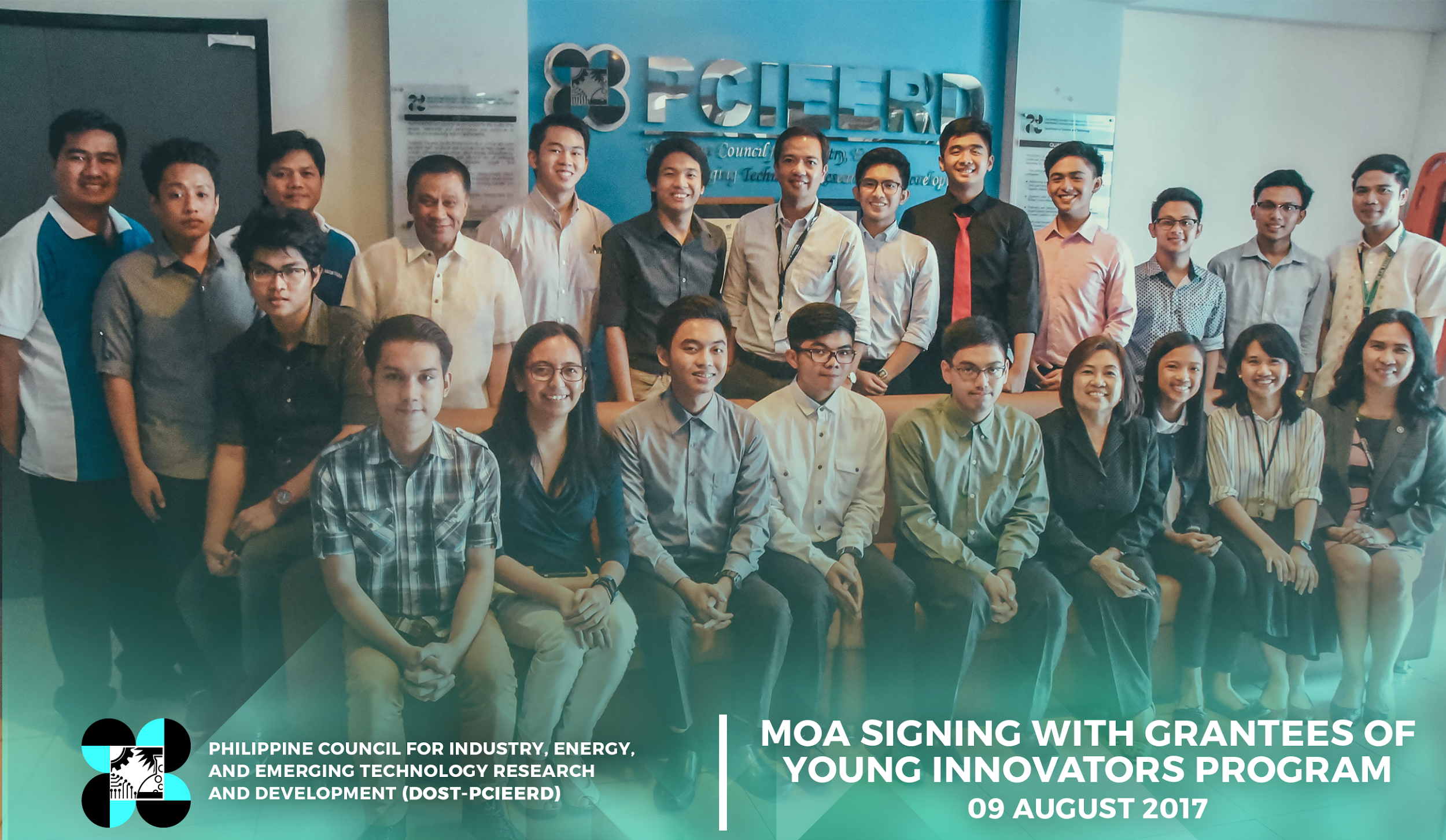 09 AUGUST 2017 – The first batch of the Young Innovators Program (YIP) has officially sealed the deal with the Innovation Council, DOST-PCIEERD, after signing the memorandum of agreement today.

Five teams and two individuals were recognized as YIP grantees during the 7th anniversary of PCIEERD last June 29, 2017 out of the 97 applications. “Why 7? It just so happened that it coincides with our 7th anniversary, but really, they are the only ones who qualified and showed promising outputs,” said Dr. Carlos Primo David, PCIEERD Executive Director, during the MOA signing.

Present at the ceremony were Dr. Voltaire Arzadon, Colegio de Dagupan President, Dr. Jay Jose De Vera, Dean of the College of Engineering in Colegio de Dagupan, and Dr. Dionisia Lanuza, Mapua Senior Science High School Principal. They were assured that the Council’s personnel will work closely with them in the development of their projects to which Dr. Lanuza responded, “I thought we are on our own, it's a different perspective now that I know that you [PCIEERD] will be supporting us in the load of work.”

The YIP aims to provide funding to promising scientists and engineers and up-and-coming researchers with innovative research direction leading to quality research paper, publication or product/invention. The YIP will usher young researchers, as young as high school students, to conduct independent research to accelerate the production of scientific workforce and encourage new and innovative research areas.

“It's very interesting that we started young in the R&D culture/discipline because it takes time for the people in the University since we are too focused on the coursework,” said Dr. Isabel Montes, one of the mentors.

The following are the Young Innovative 7:

Isabel Sieh is the Philippines’ youngest programmer at the age of 13 and founder of the company, ‘Girls Will Code.’ She is mentored by Dr. Isabel Montes of UP Diliman in her project entitled, ‘Sustainability: WattAbout.’ WattAbout is an Android app that can accurately keep track of the sustainable act/s that the user does and rewards him/her with points. (Know more about Isabel Sieh and her project: https://www.facebook.com/pinoyscience/videos/1588286644577904/)

Our first Pinoy Science Whiz Kid, Modesto Remo Jr., invented a device that gains energy just by walking. And as a YIP grantee, he will be working on the ‘Photovoltaic Dual Axis Solar Panel with Application of Folding System’ with his mentor, Sharmieann Abalayan. This project aims to increase the possibility of higher power output. (Know more about Modesto Remo, Jr. and his project: https://www.facebook.com/pinoyscience/videos/1600666133339955/)

This team is composed of six students from St. Cecilia’s College-Cebu, namely: Christian Lawrence Cantos, Rhenz Jay Estrera, John Rollene Pastor, Jhy Rosheene Paunel, Justine Nid Daffon, and Enrique Pacudan, mentored by their teachers, Wilfredo Pardorla, Jr. and Christopher Caballa, Jr. They are working on the project that aims to build a viable life support system in a high-altitude balloon, and measure temperature, air pressure, and humidity at different altitudes in the country. (Know more about Karunungan Flight Team and their project: https://www.facebook.com/pinoyscience/videos/1588294897910412/)

This team from the University of the Philippines Diliman targets to level up the utilization of 3D printing in the country. Composed of Joshua Kevin Uy, Mark Keanu James Exconde, and Engr. Jill Manapat (mentor), they aim to develop ‘Locally-Manufactured Wood-Based 3D Printing Material’ using bamboo and other Philippine wood, and ‘3D-Printed STEM Educational Kits from Recycled Plastics.’ (Know more about UP Likha 3D and their project: https://www.facebook.com/pinoyscience/videos/1605649572841611/)

Kenneth Suarez, Nyle Maliwat, Francis Tolentino, and Joel Bautista (mentor) are students and faculty from the Philippine Science High School-Central Luzon Campus. They invented a system that allows the user to control a human robotic arm through imitating the movements of the user's arm. (Know more about Team GRASP and their project: https://www.facebook.com/pinoyscience/videos/1605654646174437/)

Project Nocturnal is the study being conducted by the innovators from Colegio de Dagupan, namely: Jade Ace Ventigan, Patrick Ora, and Orpheus Petrola, mentored by Engr. Roderick Cabana. This project can be utilized for security operations purposes by making use of robots: terrain-based and drone, that can shoot and scout. (Know more about Isabel Sieh and her project: https://www.facebook.com/pinoyscience/videos/1588298757910026/)

Dr. David challenged the Young Innovative 7 to contribute in raising the standards of research and development in the country and create more innovative products, saying that “[YIP] is just part of enculturation of science and technology in the society. Investment in S&T goes a long, long way. 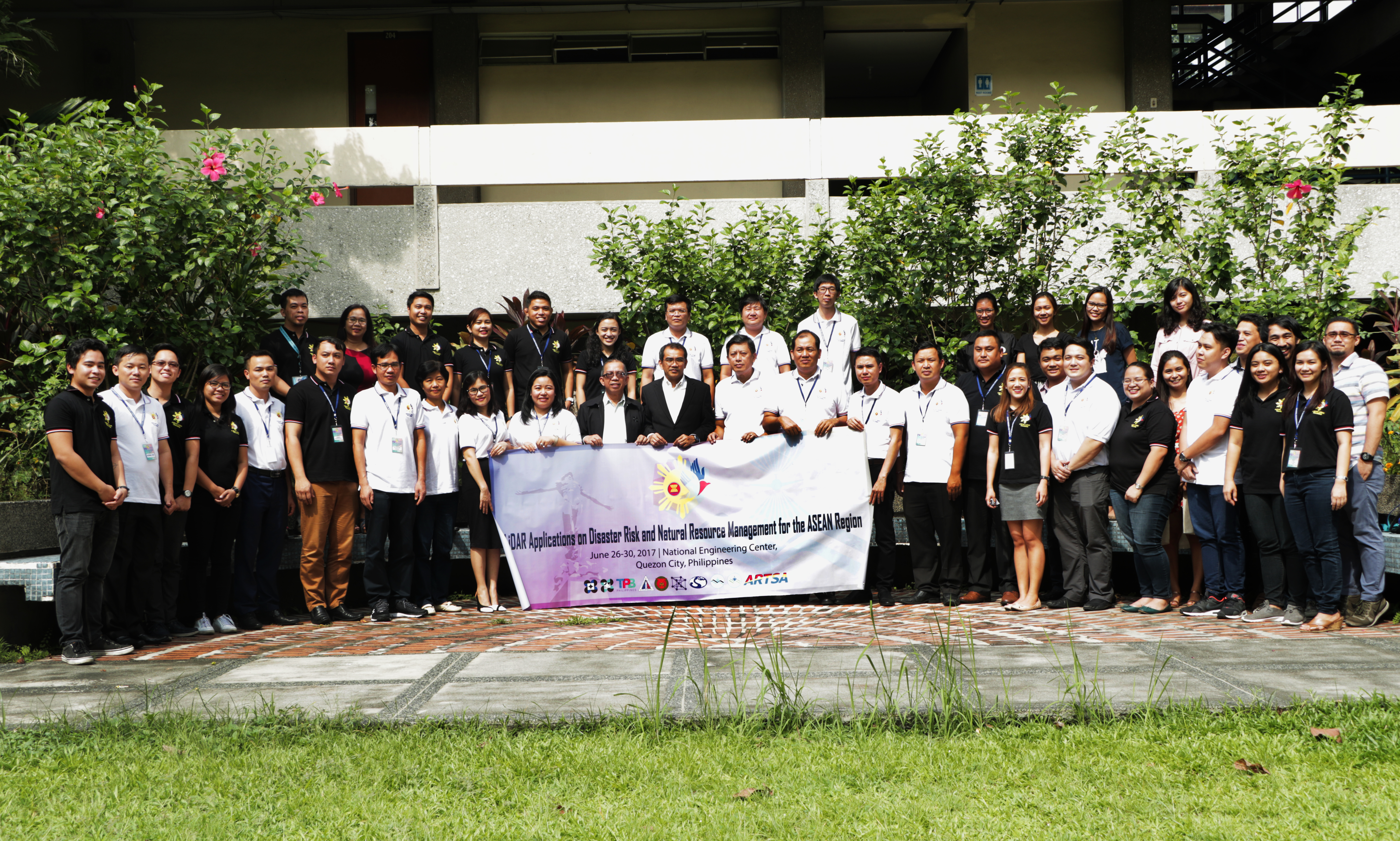 DOST-PCIEERD, UP lead Training on LIDAR Applications for ASEAN Region

QUEZON CITY, METRO MANILA – Seventeen (17) representatives from the ASEAN Region – five (5) from Cambodia, five (5) from Laos PDR, two (2) from the Philippines, two (2) from Singapore, and three (3) from Vietnam, completed the Training on LIDAR Application for Disaster Risk and Natural Resource Management for the ASEAN Region held on 26-30 June 2017 at the National Engineering Center, University of the Philippines Diliman.

Participants during the Opening Program

Participants and trainers during the Welcome Dinner with Dr. Leah J. Buendia, Assistant Secretary for International Cooperation, Department of Science and Technology (DOST)