Dr. Alan Cajes: portrait of a Filipino as a data scientist 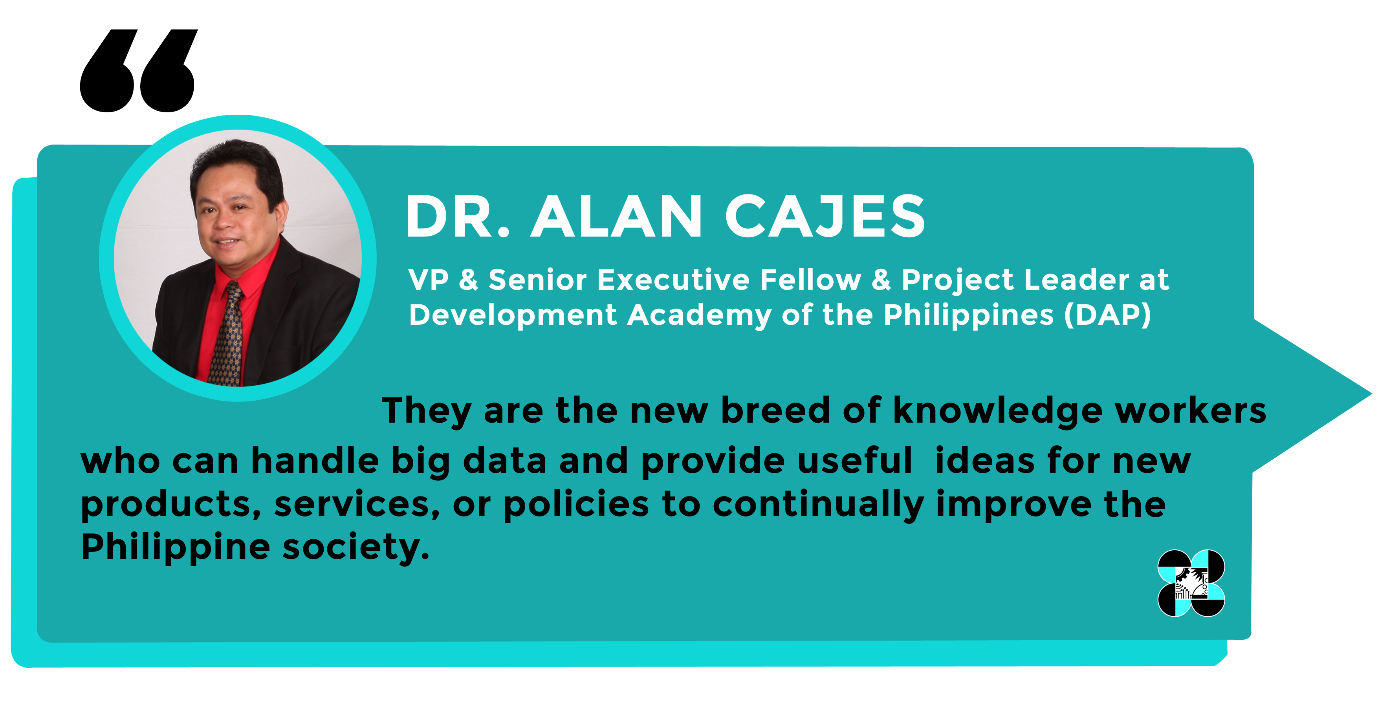 Dr. Alan Cajes is the Vice President, Senior Executive Fellow and Project Leader of Development Academy of the Philippines (DAP)

With love and devotion for his country and its citizenry, this Filipino expert find what Leonardo da Vinci called “the joy of understanding” in a bulk of data.

Born in the banana capital of the Philippines, Davao del Norte is the hometown of this prolific and versatile Vice President and Senior Executive Fellow of Development Academy of the Philippines (DAP) and Project Leader of the Smarter Philippines through Data Analytics R&D, Training and Adoption or SPARTA, Dr. Alan Cajes.

For Cajes, being a data scientist was more of necessity as his job requires him to deep dive into the huge volumes of data including Framework Formulation and Study of Spatial Development, Forecast-Based Emergency Preparedness, and Vulnerability and Adaptation Assessment, which according to him use some degree of data science.

“This happens when we collect data the best way we can and allow such, using an acceptable method, to reveal to us new information that leads to new insights, and then new knowledge that can be used to improve the way we do things in the public, business, and civil society sector,” he shared.

In an email correspondence, Cajes revealed that his typical workday as a data scientist often involves reviewing literature and previous projects; discussing and framing questions with colleagues and project team members; designing, pre-testing, and enhancing the data collection instruments; printing the final version of these instruments and training the enumerators on how to administer such; as well as data cleaning that includes detecting, removing or correcting errors. Next is tabulating, interpreting, analyzing, and presenting the data, putting together the findings, reflecting on the recommendations, writing, and presenting the report. Then, celebrate success in project task achievement that contributed something new to the body of knowledge, and hopefully helps, no matter how little, to improve the Philippine society.

He virtuously described Filipino data scientists as keen observers, able to swim in an ocean of data, and find timely as well as reliable patterns among them. He continued, “they are artists who are creative in presenting their discoveries so that the intended users will appreciate and make informed decisions, be it in the form of policies, products or services that create public and customer value.”

“Filipinos can benefit from data science through employment opportunities for our data scientists and harnessing their expertise in solving socio-economic problems at the national and local levels, as well as creating public and customer value through new products, improved services, and evidence-based policies,” he said.

Recognizing the high demand for data scientists, he urged all Filipinos to seize this exceptional opportunity to become SPARTA scholars and live out the core values of Dangal (honor and integrity), Galing (smart and innovative), and Tatag (stable and future ready).

“But more than turning raw data into valuable insights,” Cajes says “data scientists are expected to have the skill set (e.g., data mining, data visualization, among others), mind set (e.g., curiosity and synoptic thinking) to provide meaningful and useful insights to decision makers and executives, and a patriotic calling of using data science to solve some of the challenges that we are facing such as infectious diseases, limited access to potable water, poverty, climate-related disasters, corruption, inefficiencies in the delivery of services, and many more.”

Recalling these traits that a data scientist must possess, he was reminded of an experience he had long ago with some of his trailblazing projects that the DAP conceived, designed, and implemented in the 70s including the Social Indicators Project (1974-75) that gave birth to the idea of the Social Weather Stations (SWS), and the Population, Resources, Environment, and the Philippine Future (PREPF), a forward-looking project in 1975-77 that explored historical trends in Philippine society and their implications for the future – 2000 A.D.

“Our pioneer data scientists showed us that there is an alternative way of probing the future – evidence-based analysis,” he explained. “That is why in 2016, the Department of Environment and Natural Resources (DENR) tapped the DAP to design and implement a project like the PREFP. This is a Framework Formulation and Study of Spatial Development under the new normal with the idea to explore data and analyze their implications on safer settlements in the future.”

The life of a data scientist is quite like a roller coaster ride and even the Analytics Association of the Philippines (AAP) and Coursebank recognized that one must face the challenges in exponential growth of data and the limited number of data literate workforce.

"The estimate this year is that every person generates about 1.7 megabytes of data per second. This trend will increase with the emergence of smart city initiatives nationwide. If we don’t have the appropriate infrastructure support, big data warehousing and data mining won’t be easy," Cajes remarked. "APEC estimates 340,880 data science and data analytics workers will be needed in the Philippines by 2022. So, we have a huge demand compared to the supply, which is likely less than 20% of the demand."

He supported the claim of the Philippine Institute of Development Studies (PIDS) about scarcity of DSA competencies in the current workforce and a misalignment between the demand and supply of DSA professionals in the country. Specifically, it revealed that the 10 DSA-related programs in the Philippines produced 176,597 graduates but only 38% or 62,583 workers were considered fit for the DSA field. Also, the International Labor Organization concluded that there is a risk posed by automation on about 49% of the workforce in the BPO industry.

This Filipino data scientist holds the notion that the country can become one of the “high potential” and then “leading” nation with the right policies and investments in appropriate infrastructure despite the World Economic Forum declaration that the Philippines fall under the “legacy” archetype in relation to Industry 4.0. Bold, albeit cautiously optimistic, he uttered that it is possible to become one of the global leaders in data science.

"Although we are about two years behind Singapore, Malaysia, Indonesia, and Thailand in preparing for data science, the Department of Science and Technology (DOST) remains steadfast in providing the required support. We have a good number of schools that offer degree programs in statistics compared to other Southeast Asian countries. We have a younger generation that we can train on data science and be mentored by experienced data science academics and practitioners," Cajes expressed.

Supported by the DOST, through the Philippine Council for Industry, Energy and Emerging Technology Research and Development (PCIEERD), and led by the Development Academy of the Philippines (DAP), the Project SPARTA seeks to produce 30,000 data scientists through a massive online training program in data science, analytics and its related fields. It creates necessary online education, R&D mechanisms and infrastructure enabling data science and analytics to strengthen smart governance practices.

“We encourage them,” he says referring to the SPARTA scholars “to learn as much as they can on their own (through e-learning modules), and with their fellow scholars (through hackathons). They are the new breed of knowledge workers who can handle big data and provide useful ideas for new products, services, or policies to continually improve Philippine society.”

“We look forward to the day when our SPARTA scholars become valued assets in their respective organizations, as well as coaches and mentors to a new generation of knowledge workers,” he says.