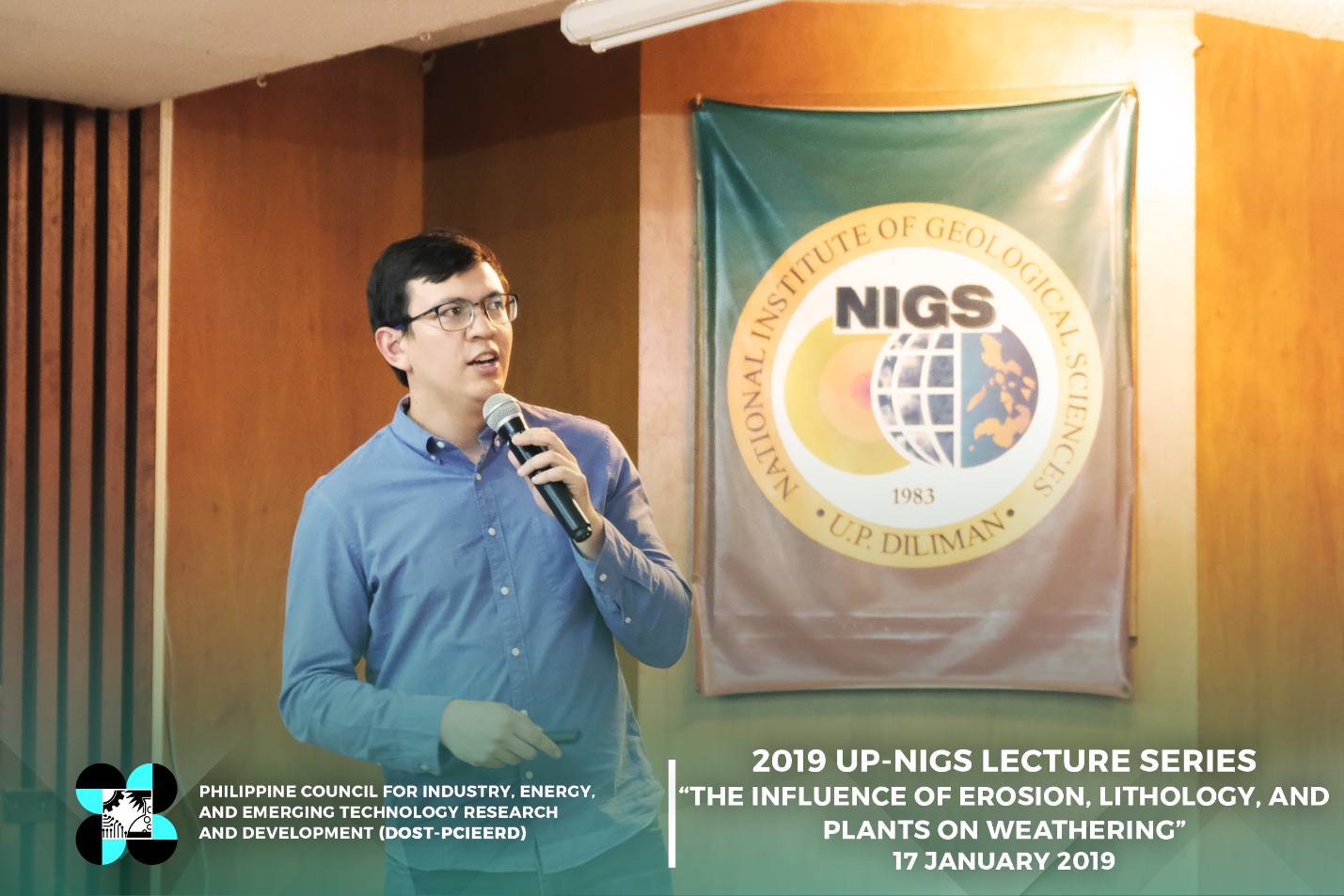 17 JANUARY 2019 -- To kick off the 2019 UP NIGS (National Institute of Geological Sciences) Lecture Series, Balik Scientist Dr. Daniel Ibarra of Stanford University gave a talk entitled, "The Influence of Erosion, Lithology, and Plants on Weathering."

Dr. Ibarra is currently a post-doctoral fellow at the Department of Geological Sciences in Stanford University. He is hosted by UP NIGS and is currently a part of the Balik Scientist Program (BSP) of DOST.

The Balik Scientist Program (BSP) is a brain-gain initiative to encourage Filipino scientists, technologists, and experts in other countries to return to the Philippines and share their expertise to accelerate scientific, agro-industrial, economic, and human resources development in the country. For more info, visit www.bsp.dost.gov.ph.

LOGO & SLOGAN MAKING CONTEST
DOST-MIRDC and DOST-ITDI are in search of a logo and slogan for the country's first ADVANCED MANUFACTURING CENTER (AMCen)!
DOST is set to unveil the Philippines' first Additive Manufacturing and 3D Printing Center which aspires to be the country's leading research center in innovative 3D printing technologies, processes, and materials. This will be one of the first government-led centers in the ASEAN region that aspires to be a game changer leading to Industry 4.0 goals

Entries must be submitted in hard copy to the Office of the Chief, Materials Science Division of DOST-ITDI and in vector (.svg or .png) format to This email address is being protected from spambots. You need JavaScript enabled to view it.

CALL FOR PAPERS AND POSTERS for the first International Nanotechnology Conference in the Philippines!
Submit your abstracts/papers here: www.incp2019.com
Deadline : 15 February 2019

If you have inquiries, contact the conference's secretariat at This email address is being protected from spambots. You need JavaScript enabled to view it. / (+632) 837-2071 local 2203 or 2196 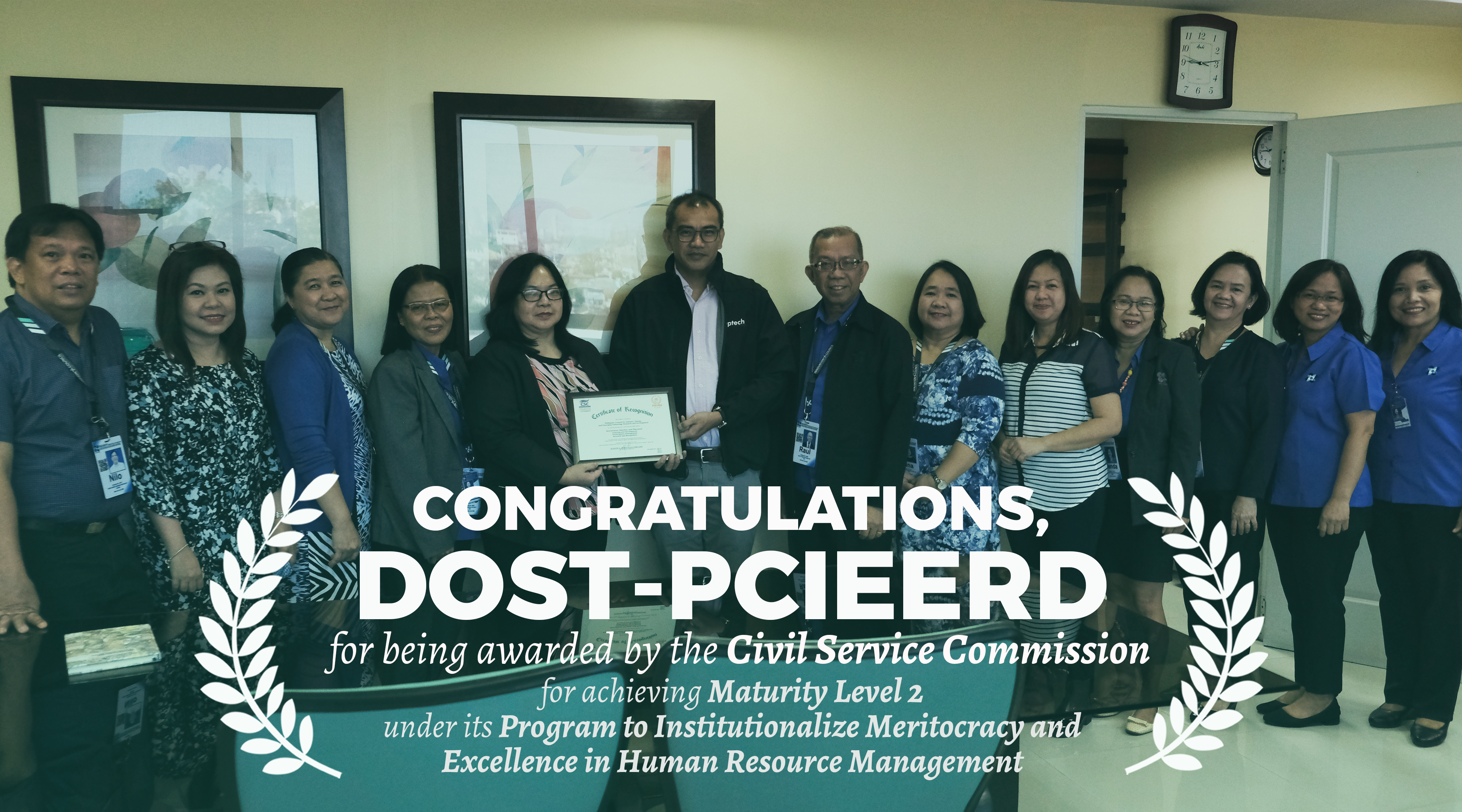 15 JANUARY 2019 -- The Philippine Council for Industry, Energy, and Emerging Technology Research and Development (PCIEERD) achieved Maturity Level 2 from the Civil Service Commission, under the commission's Program to Institutionalize Meritocracy and Excellence in Human Resource Management (PRIME-HRM).

PRIME-HRM aims to elevate public sector human resource management to a level of excellence through the assessment, assistance, and awarding processes of HRM systems, practices, and competencies using HRM maturity level indicators that are at par with global HRM standards. 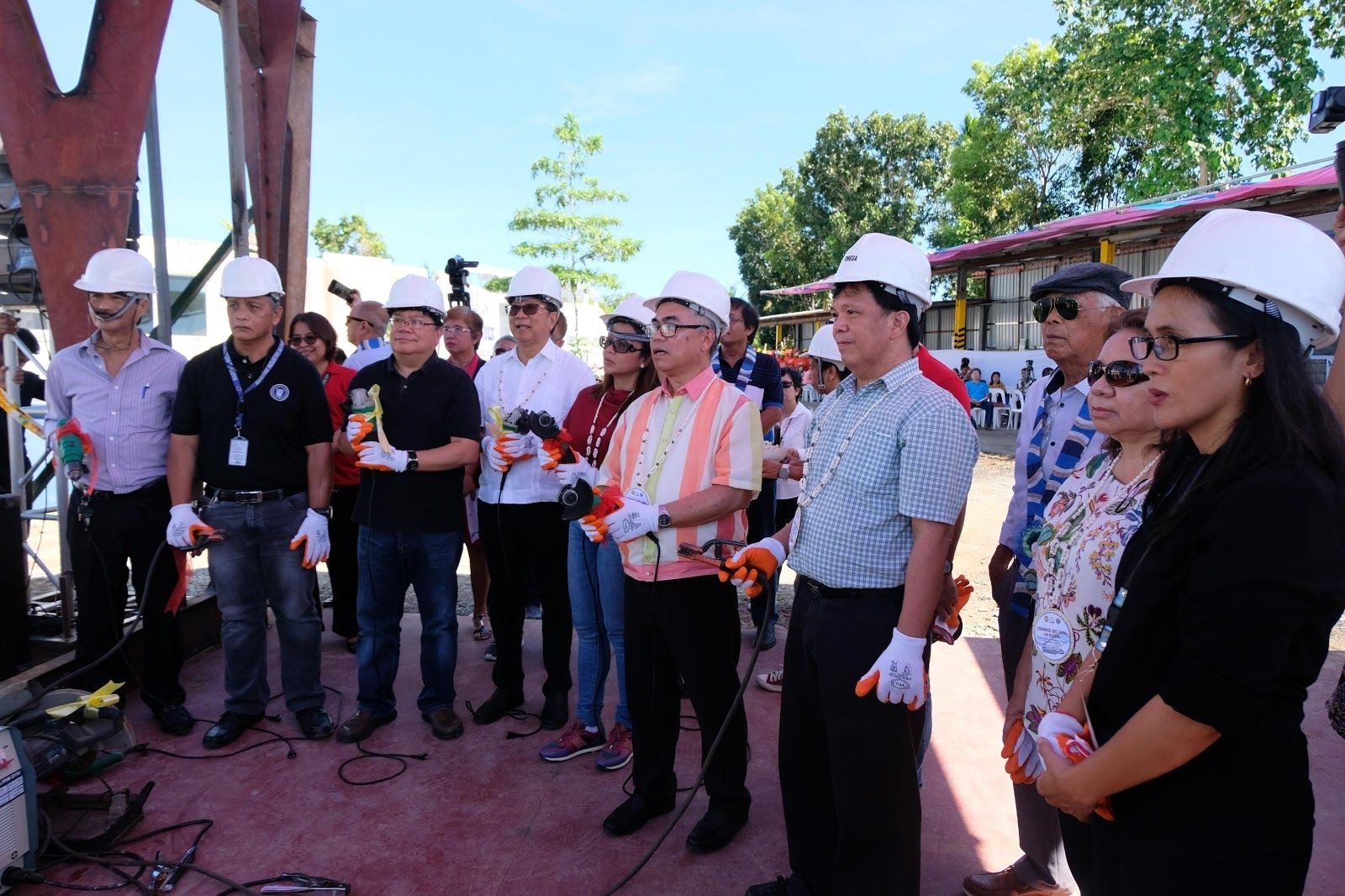 NEW WASHINGTON, AKLAN -- The Philippine maritime industry rides into a new wave of innovation as construction of the country’s first hybrid trimaran begins.

Officials from the Department of Science and Technology (DOST), Aklan State University (ASU), Maritime Industry Authority (MARINA), local government officials of Aklan, and Metallica Shipyard marked the beginning of the build of this innovative transport as they placed the framework of the hull of the vessel on the riverbed of New Washington.

DOST-Philippine Council for Industry, Energy, and Emerging Technology Research and Development (DOST-PCIEERD) Deputy Executive Director Engr. Raul Sabularse expressed optimism that the commencement of the build will be the spark to transform the maritime industry in the country.

“We are hopeful that the hybrid trimaran project will launch a new wave of innovations in the maritime industry,” he said.

Sabularse said the project also creates a new opportunity in studying alternative energy sources in the country as the trimaran will harness energy from the ocean to augment its energy requirements.

“Our search for new and viable alternative energy resources gets a boost with this ingenious endeavor,” he said.

The workers and the people behind the production of the trimaran vessel.

DOST bankrolled the P76-million fund for the project which is implemented jointly by ASU, MARINA and Metallica Shipyard, MARINA and DOST Regional Office Number 6..

The hybrid trimaran is designed to generate its own electrical supply from the waves it gathers from the outriggers of the craft.  Ocean waves will drive double action hydraulic pumps that will power a generator to produce which creates the electricity.

Salvador, the owner of Metallica Shipyard, explained that the more waves that the vessel encounters, more power will be produced.

“We see this technology to improve the vessel’s energy efficiency, making it not only cost-efficient, but also environment-friendly,” he said.

Salvador said the vessel will utilize multi-engine technology that prevents it from encountering total engine failure while at sea, minimizing maritime accidents. It will also be constructed with a specifically engineered design to address the possibility of capsizing, making it practically unsinkable and able to withstand harsh environments at sea.

Engr. Rowen Gelonga of DOST-6 highlighted the role of the Western Visayas in Maritime Transport. He also emphasized that the partnership between ASU and Metallica is the foundation for the project success.