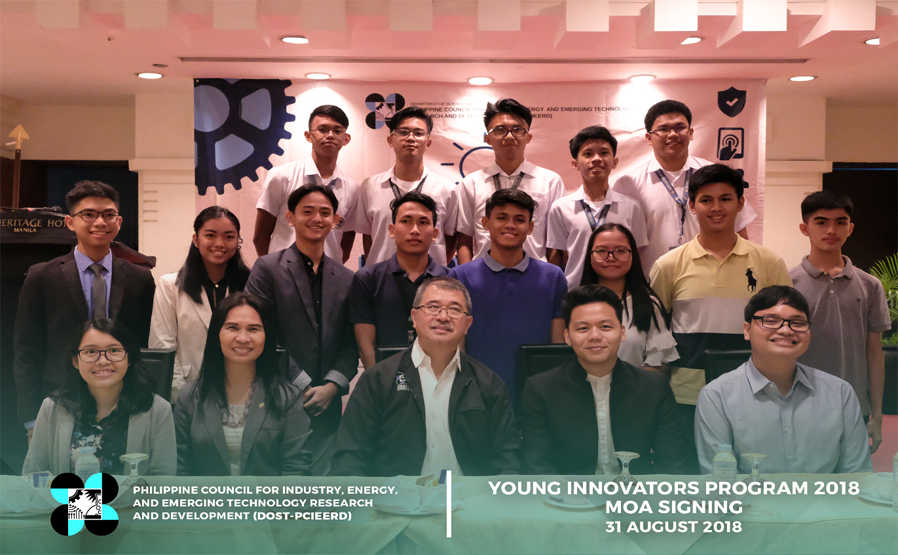 31 AUGUST 2018 – The second batch of Young Innovators Program (YIP) awardees officially sealed their partnership with the Department of Science and Technology’s Philippine Council for Industry, Energy, and Emerging Technology Research and Development (DOST-PCIEERD) through the signing of a memorandum of agreement (MOA) held at the Heritage Hotel Manila.

Launched in 2017, YIP recognizes promising researchers under the age of 30 to further encourage them to delve into scientific research through provision of financial assistance. This year’s YIP awardees, who were announced last July 18 during the National Science and Technology Week (NSTW), consists of six (6) aspiring young innovators out of 55 who submitted their research proposals. The six (6) YIP awardees, the academic institutions they represent, the title of their research projects, and the names of the members and mentors, are as follows

Department of Mining, Metallurgical, and Materials Engineering – University of the Philippines Diliman

Institute of Biology – University of the Philippines Diliman

Opening the program for the MOA signing, Engr. Ermie M. Bacarra, DOST-PCIEERD Human Resource and Institution Development Division (HRIDD) Chief, congratulated the young innovators for being YIP finalists. She also added, “I would like to congratulate their parents for raising such talented and creative children, and praise the officials of the academic institutions that our young innovators represent, for continuously giving them support to follow their aspirations.”

“As a big part of the country’s population is composed of young people, it is only justifiable that we in the DOST, through PCIEERD, also give opportunities to our country’s young minds, hopefully inspiring students to pursue careers in science and technology,” says DOST Secretary Fortunato De la Peňa after commending the second batch of young innovators for their love for Science.

The signing of the MOA means that the grant may be released so that the YIP awardees can now start with their respective researches, with the guidance of DOST-PCIEERD.