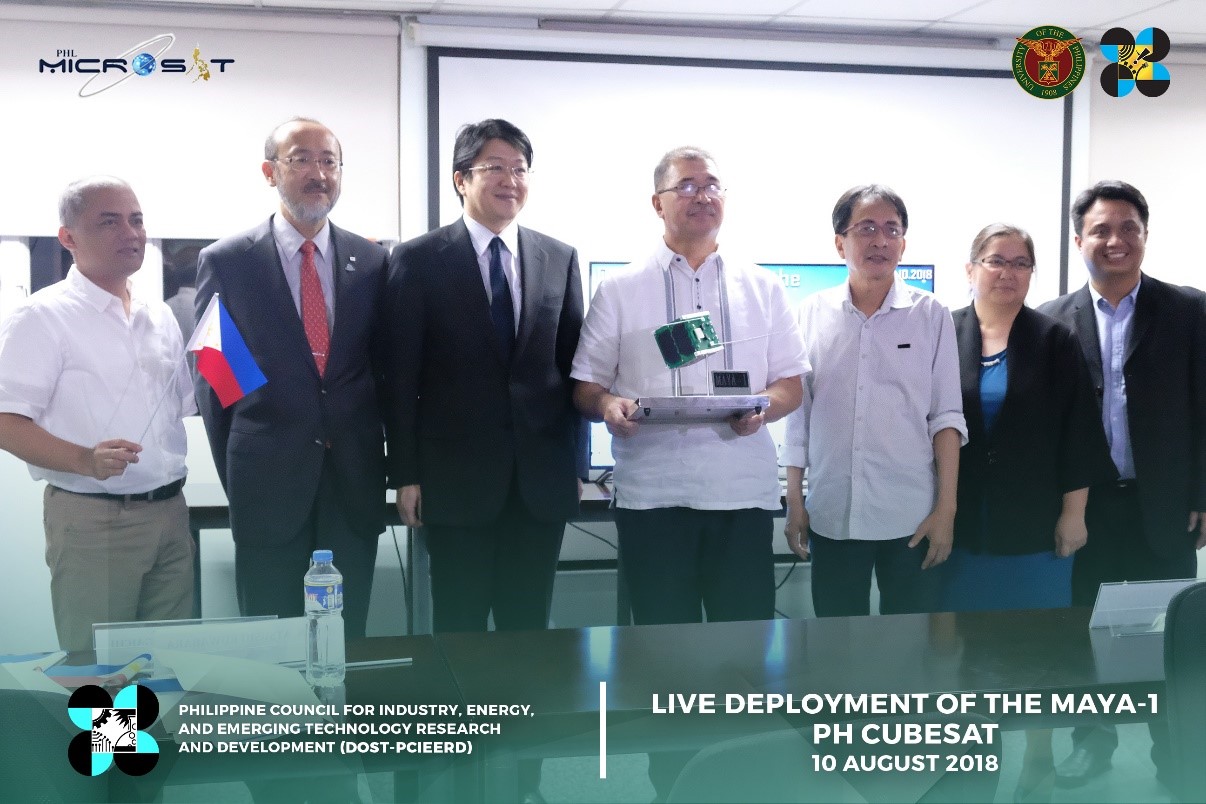 Key officials and guests from DOST, UP, JAXA and Embassy of Japan in the Philippines posing with a 1:1 replica of Maya-1 after the successful deployment of the BIRDS-2 cubesats from the ISS. From left to right: Dr. Joel Joseph Marciano, Jr., Director of DOST-ASTI; Mr. Shigeki Kamigaichi, Senior Expert of JAXA,; Minister Atsushi Kuwabara, Consul General of Embassy of Japan in the Philippines; Dr. Fortunato dela Peña, Secretary of DOST; Dr. Michael Tan, Chancellor of UP Diliman; Dr. Evangeline Amor, Vice Chancellor for Academic Affairs of UP Diliman; and Dr. John Richard Hizon, Director of UP EEEI. (Photo by DOST-PCIEERD)

Manila, August 10, 2018 — Cheers full of Filipino pride were heard in the University of the Philippines (UP) Diliman Electrical and Electronics Engineering Institute building as officials from UP, the Department of Science and Technology (DOST), the Embassy of Japan in the Philippines, and the Japan Aerospace Exploration Agency (JAXA) witnessed the live deployment of Maya-1, the Philippines’ first ever cube satellite (CubeSat).

After its turnover to JAXA last May 15, the Maya-1 CubeSat was brought to the International Space Station (ISS) through the SpaceX Falcon 9 CRS-15 on June 29. "This is actually our second major achievement in space science and technology," said UP Diliman chancellor Michael Tan, looking back on the Diwata-1 microsatellite launch on March 23, 2016 from Cape Canaveral and its deployment from the ISS on April 27, 2016.

The development of Maya-1 falls under the BIRDS-2 (Birds Satellite Project), a cross-border interdisciplinary satellite project that accommodates non-space faring countries. The project consists of 11 participating team members from four different countries - Bhutan, Japan, Malaysia and the Philippines. The Philippines was represented throughout the project by two DOST scholars enrolled in graduate studies at the Kyushu Institute of Technology (Kyutech) - Joven Javier from the Advanced Science and Technology Institute (ASTI) of the DOST and Adrian Salces of UP Diliman. Javier, in particular, was designated as Project Manager and led the multinational BIRDS-2 team in the development of the CubeSats.

“This aspect of launching [the Maya-1] is a very important step,” says DOST Secretary Fortunato T. de la Peña, in relation to DOST’s current plans on establishing a Space Technology Development Program in the Philippines. According to de la Peña, the said program contains many components – from education, to human resource development, to industry development – capable of producing outputs which can later on be utilized and applied by other agencies. "All of these can be facilitated – since we practically started from zero – by having international collaborations. We do not want to be left out," says de la Peña. 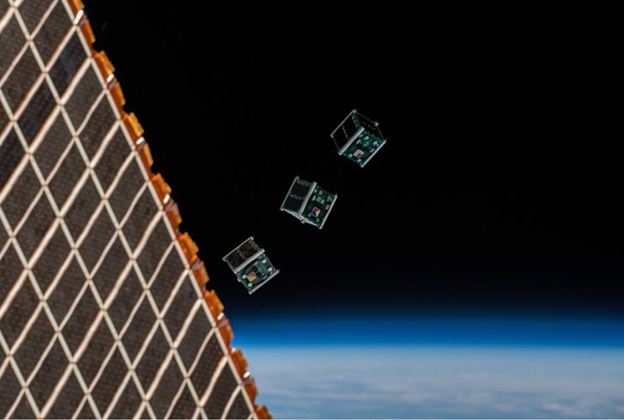 The Maya-1 was launched together with the BHUTAN-1 CubeSat of Bhutan and the UiTMSAT-1 CubeSat of Malaysia. (Photo by Alexander Gerst, European Space Agency)

As it is deployed into space, Maya-1 is set to demonstrate a nanosatellite-based remote data collection system called Store-and-Forward (S&F) and a digital messaging capability through Automatic Packet Reporting System (S&F). It will also conduct magnetic field measurements, test a low-cost commercial off-the-shelf Global Positioning System (GPS) receiver, and record single-event latch ups in orbit. According to UP President Danilo Concepcion, "This is another successful day for the deployment of Maya-1. It showcases what UP can do, what the Filipino can do."

The participation of the Philippines in the BIRDS-2 Project and the development of Maya-1 is part of the research program, “Development of the Philippine Scientific Earth Observation Microsatellite” or PHL-Microsat Program implemented by UP Diliman and DOST-ASTI with funding from the DOST Grants-in-Aid (GIA) and project monitoring by the Philippine Council for Industry, Energy and Emerging Technology Research and Development (PCIEERD).