Developments in the prototypes of the Department of Science and Technology's (DOST) Automated Guide-way Transit System (AGT) sheds more light in addressing the grave lack of environmentally sustainable technology that will ease the country's air pollution and traffic.

With air pollution in Metro Manila hitting higher than the acceptable level set by Republic Act 8749, and congested roadways causing high traffic related costs, the need for sustainable technology alternatives in the transport industry is imperative.

Based on the Philippines' Republic Act 8749, also known as the Philippine Clean Air Act, the allowable total suspended particulates (TSPs) or amount of dust and solid pollutants in the air is 90 ug/Ncm. However, according to the Department of Environment and Natural Resources' (DENR) Environmental Management Bureau, the TSPs in Metro Manila for 2013 reached 118 ug/Ncm and is triggered by smoke-belching vehicles.

Similarly, road traffic in the country is very problematic as it leads to high fuel cost and can also affect the country economically as it relates to unearned monetary value among workers being stuck in traffic. These implications of traffic are severe; in fact, the Japan International Cooperation Agency reported that the country can lose 6 billion pesos daily by 2030 if traffic in the Philippines will not be addressed.

As a proactive measure, a prototype AGT system is being developed and funded by the DOST in partnership with the University of the Philippines Diliman. The agencies behind this pioneering effort are the Metals Industry Research and Development Center (MIRDC), Philippine Council for Industry, Energy and Emerging Technology Research and Development (PCIEERD) and Project Management and Engineering Design Services Office (PMEDSO).

AGT in UP Diliman and AGT 120 in Bicutan

The project was conceptualized to develop a Mass Rail Transport similar to the monorail technology (a railway with one track and is often elevated) having only 1/5 of its cost. Specifically, the development of a prototype AGT aims to demonstrate it as an efficient transport model in the Philippines; develop the local capability and industry on Mass Rail Transits (MRT) and Light Rail Transit (LRT); and promote the AGT into a mainstream environmentally-friendly and sustainable transport system suitable for Philippine conditions.

The AGT is an electric train and is a fully automated-driverless transit system (automatically steered). Having an environment-friendly alternative to usual transportation means such as jeepneys, taxis, MRT and LRTs will aid in addressing the highly problematic traffic among Filipino commuters. Further, this will serve as a feeder system to MRT and LRT.

Currently, there are two AGT prototypes- one in UP Diliman and another in Bicutan that runs on an elevated test track. The AGT prototype in UP can carry a maximum of 30 passengers per coach and has two passenger sections with safety features. It also has a communication and automated fare collection system. The prototype has two coaches that are fully-airconditioned and is equipped with suspension system, solid tires for guide wheels and extra wide automatic sliding doors. Each coach has a spacious cabin locally designed and developed by DOST. The full load top speed of each coach is 30-45 kph. 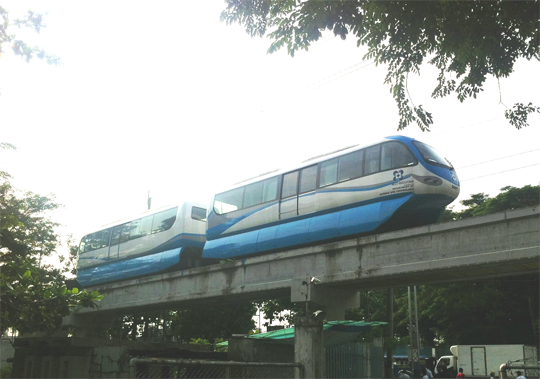 AGT prototype in UP Diliman

Meanwhile, the AGT 120 was situated in Bicutan, Taguig City as it is noted to be one of the highly urbanized locations in Metro Manila. Similarly, it complements the ongoing development in C-6. With its bigger size than the prototype in UP, the AGT in Bicutan can carry a total of 120 passengers per coach having its target maximum speed at 60 kph. 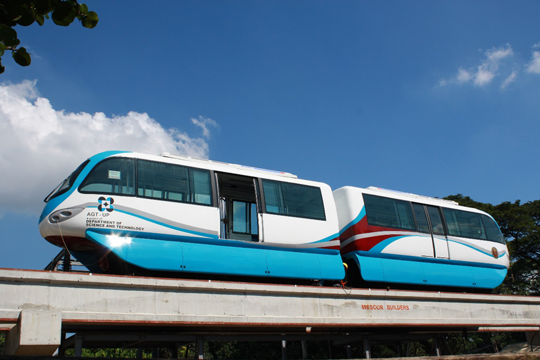 Presently, DOST and UP Diliman are still facilitating updates in developing the AGT prototype so it can effectively cater to the needs of its intended users. Continuous test runs and monitoring are being made by engineers from UP and MIRDC to address the AGT's identified areas for improvement. Some areas given particular attention to are passenger safety, emergency protocol in case of power shutdown, and safe braking distance.

In addition, the UP- National Center for Transportation Studies (NCTS) currently conducts a pre-feasibility study on three (3) potential routes of the AGT, namely AGT 120 in Bicutan, AGT 30 in UP Diliman, and a proposed new AGT site in Litex Rd, Quezon City. The pre-feasibility study will determine the potential extension of the current AGT tracks to come-up with its master plan.

The target site extensions involve extending the AGT Bicutan track to C-6, possibly all the way to Rizal, and of the AGT UP track to PhilCOA and/or Katipunan to address the needs of the areas' high-commuting population.

Albeit still in its prototype testing stage, several agencies and private institutions already expressed their intent to support the commercialization of the AGT, such as the Local Government Unit of Quezon City (Litex Rd), once it is already fully-developed. This is with the aim of providing a sustainable alternative in the transportation sector through a Filipino built mass transport system.

With the development of the AGT, DOST hopes to contribute to the country's economic progress by producing a locally made, safe, and reliable developed mass transport system that will help curb traffic and promote a greener environment. Its launching will also serve as a milestone for the country as it will be the first Filipino-made AGT exhibiting the ingenuity of our engineers. (Edgilyn R. Alcasid)