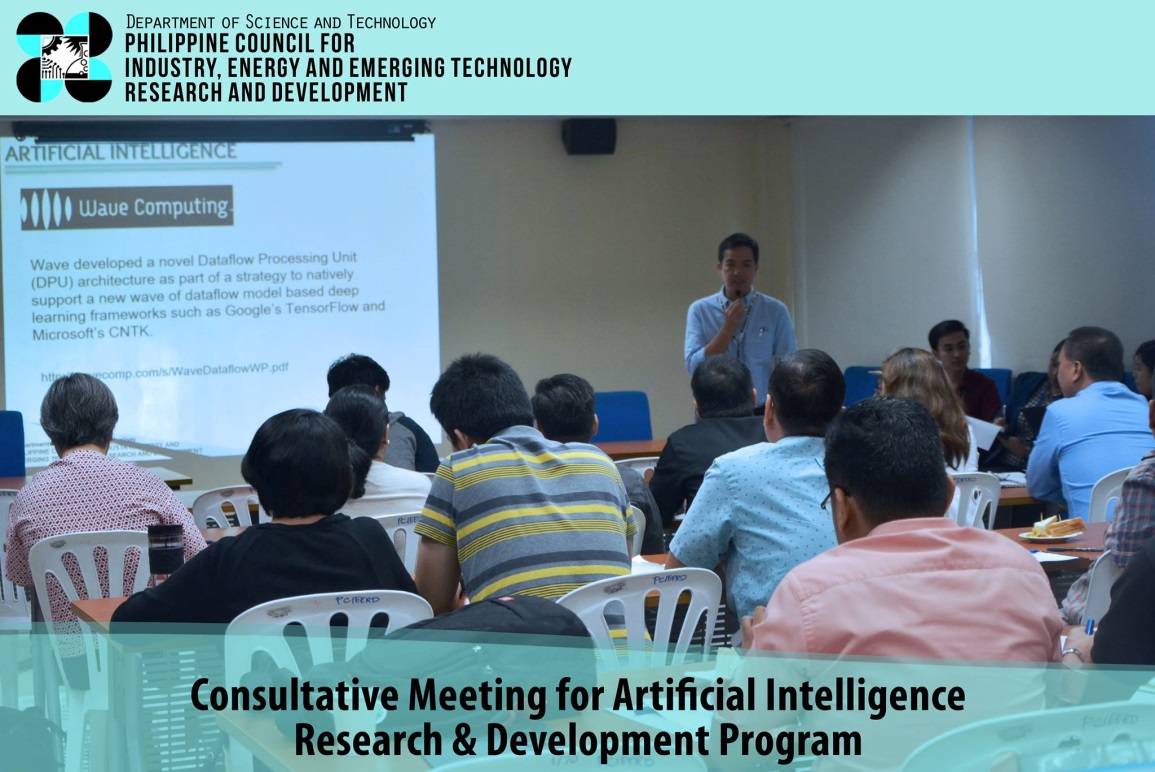 This is in line with the 15-point agenda of the Department of Science and Technology (DOST) and Secretary Fortunato De la Peña’s vision to jumpstart Artificial Intelligence (AI) in the country. The meeting aimed to come up with a roadmap for AI in the next six years through dialogues and brainstorming activities with experts in the field of AI.

PCIEERD Executive Director, Carlos Primo C. David started the discussion by tackling the big fields under AI and the current situation of this field in the country. He suggested to partner with industries such as Wave Computing to jumpstart AI in the Philippines which Dr. Prospero Naval Jr., Associate Professor in UP Diliman, agreed to saying that this industry is 25 times faster than the fastest of Nvidia, “world’s leading in visual computing”; and is capable of computing data in just a few hours that other systems take a couple of days.

Dr. David envisions AI to be incorporated as regular field in Computer Science curriculum and to become the ‘powerhouse’ in this particular field. He further mentioned that they would like to create an independent AI program with reference to other existing efforts such as initiatives by CHED. Actual product outputs are expected, not only for training and beefing up school curriculums. It targets to cater needs inherent to our country and those that are globally applicable, but Dr. Naval thought that development of AI technologies will be more feasible if they targeted niche areas.

According to Dr. David, Dado Banatao of Wave Computing projected that Business Outsourcing Companies (BPOs) will be ‘dead’ in the next three years wherein the Philippines will lose a million jobs. One of his challenges to the experts is to create a strategy to keep some of the BPO jobs.

A breakout session followed where the experts were divided according to their target areas: 1) Health; 2) Information Technology and Business Process Outsourcing (IT-BPO); 3) Education; 4) Transportation and Infrastructure; and 5) Environment and Agriculture. They were tasked to identify the priority needs of the AI community, existing initiatives or resources, gaps that need to be addressed by DOST as well as suggestions or concerns for these gaps.

The IT-BPO group suggested that AI technologies be used in areas such as Healthcare Analysis and Medical Diagnostics Support, and overall, a total support for the BPO industry. Sessions with open-minded BPO companies and Information Technology and Business Processing Association of the Philippines (IT-BPAP) were also proposed to pose the challenge of AI application to other companies.

The Education sector group noted that AI applications in education should focus on least learned skills, inexpensive, may adapt existing systems (like ASSISTment a program that provides students instructional assistance), and include life-long and life-wide learning. The same importance is put on having AI infrastructures and trainings in schools. The group suggested to publicize intellectually and academically accomplished young achievers to encourage other students to excel in the field.

For the Health industry group, an intelligent server which houses data of diseases for reference in aiding diagnosis of disease was the gap identified where it was suggested to use a machine that can detect and respond to emotion, different local dialect, and physical movement.

The Transportation and Infrastructure group presented various systems where AI technologies can be used to contribute to the issues faced by the industry such as development of local intelligent signal control system, road safety assessment system, bus monitoring system, and mobile application for crowdsourcing.

Lastly, the group on Environment and Agriculture mentioned possible applications of AI technologies to address the gap for this sector like in urban environment monitoring, water quality monitoring, and disaster risk reduction.